It’s no secret that Tuscany is my favourite Italian region. From the great wine and amazing food, to the simplicity of the scenery, and the history and character of the medieval hilltop towns. Here are my favourites!

The quintessential Tuscan hilltop town, Montepulciano has everything – narrow streets, old buildings, high climb-able towers and great, great wine. There are (probably) hundreds of small independent wine merchants here, most of whom will let you have free wine tastings, and some will let you tour the cellars – totally worth it, just for a view of the massive wine barrels (and possibly to get some shade from the Italian sun)! It’s small, quaint and immediately 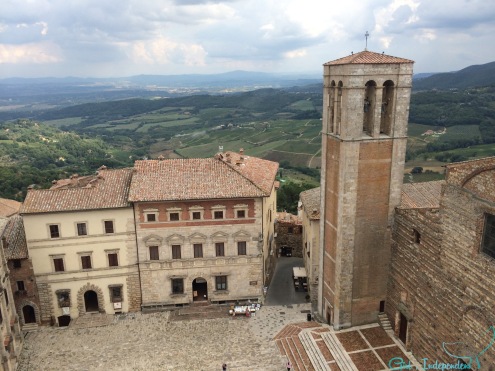 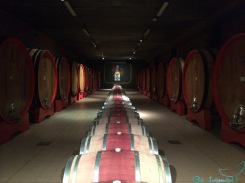 Top Tuscany Tip: Stay at the quirky Meuble il Ricchio hotel and ask for a balcony room for stunning views like this:

A little off the normal tourist track, Cortona is a small hilltop town in Tuscany near the Umbrian border. It was the setting for the book (and movie) Under the Tuscan Sun (and is therefore less off the tourist track than it used to be).

As with most Medieval Italian towns the Duomo is worth a visit, along with the many piazzas to just sit, eat gelato or drink prosecco. There are great views from many vantage points, and charming shadowy alleys to disappear into.

Top Tuscany Tip: find a street cafe ask what wine they have on special offer and sit and watch the world go by – we managed to get a stunning Montalcino bin end for a few euros. You’ll probably get some lovely free antipasti to go with it. 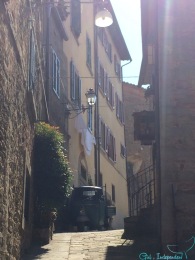 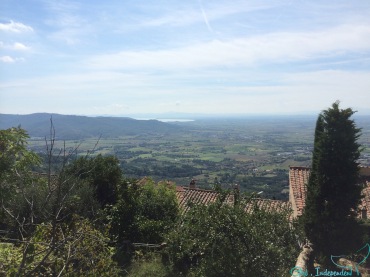 Technically not in Tuscany (Umbria, but I’m not going to argue) Assisi is famous for Saint Francis, and his basilica sits at Western edge of town. It’s a marvel of renaissance architecture with its two floors, and it houses many works of art from Giotto and many others.

Aside from the churches, the Rocco Maggiore is an ancient castle fort at the very top of a steep hill and the views are worth the climb.

Top Tuscany tip: go into the Rocca Maggiore, underneath the walls into the 12th century tunnels which connect the different parts.

View from the Rocca Maggiore 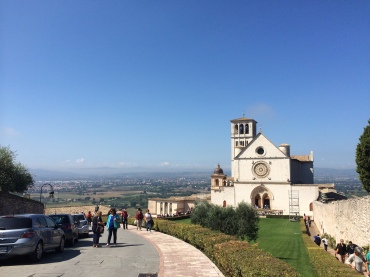 The famous towered medieval village, San G boasts more towers than any other place in Tuscany​ and at one time had 72. The story goes that in order to show ones wealth, the aristocrats would build towers – the higher the tower the wealthier you were. And more power you had.  A bit like a medieval penis waving contest.

14 towers still stand, and you can climb some of them – the biggest (of course if you’re going to climb one you might as well do the biggest!) is the Torre Grosso at 54m. It’s a hard climb but worth it.

Top Tuscany Tip: there is a gelato shop in the Piazza della Cisterna that claims to have won the best Gelato in the world for years running. I have no idea if it is true, but it is pretty bloody good gelato and if the queue isn’t mental, it’s actually worth waiting for.

Ok, so I’m stretching the definition of a village with Sienna, but it’s definitely worth a mention. Smaller than Florence, Sienna has plenty of gorgeous architecture and Duomos to rival its bigger famous neighbour.

The Piazza del Campo is a lovely place to stop and take in the renaissance surroundings, although it does get busy in peak times. The Torre del Mangia overlooks the piazza and again if you like views it’s worth the climb.

Top Tuscany tip: if it’s not too busy the Piazza del Campo is great for a quick chilled prosecco, but be prepared to pay tourist rates. You might be better if finding a smaller street cafe off the main square.

Inside the Basilica Sienna

A small walled village in the famous wine region, Radda doesn’t feel as old and quaint as some of the famous Tuscan villages (it has a lot of tourist shops for a small place), but it does have some lovely windy alleys off the main tourist street, and nice architecture. And of course, plenty of little trattorias to serve you local Chianti that’s better than any you’ve ever tasted at home (and much much cheaper).

If I’m absolutely honest, the only reason to go here, is if you’re an Assassins Creed Fan. If that means nothing to you, then you can skip on to the next one!

If you are a fan, then you’ll recognise the name of the village from the video game. Sadly, the real Monteriggioni doesn’t have the Auditore mansion, nor does it have lots of rooftops and towers that you can scale like an assassin, or piles of hay for you to fall into from height. It does however have the walls surrounding it, and you can pay to walk around them, and pretend you’re Ezio firing canons at the Borgia. Video games aside, there a couple of nice trattorias here, so it’s worth an hour’s trip if you’re passing.

Barga’s almost impossible to get to without a car, and difficult enough with one! The road up to this hilltop town is precarious and scary if, like me, you’re used to the other side of the road. Coupled with Italian drivers, it makes it challenging to say the least. But once you’re there, you have a lovely quaint town to meander along, quite different from southern Tuscan villages like Monteriggioni. The main Duomo is the draw here, situated right at the top of the hill and presenting the knackered climber with breathtaking views of the village and the surrounding hills.

Top Tuscany tip:, Park in the Piazzale del Fosso and enter the old town through the gate there. Walk to the top of the hill (any streets, you can’t get lost, just keep going up) and savour the views from the cathedral. It’s hard but it’s well worth it. On the way back down, treat yourself to pizza or pasta (and a glass of vino) at L’Altana trattoria​  the food is spectacular.

Disclaimer: although Vagli Sotto made my list, I don’t actually recommend you go “in”. Let me explain.

The village is precariously placed on top of a hill surrounded by a man made lake. The lake was created in 1947 by the local energy company building a dam which resulted in another village, not so high up, being flooded.

The result is a stunning view, framed by huge mountains. The sad thing is there’s actually nothing in the village for visitors at all, not even a decent trattoria. If you want gorgeous views, and interesting drive and an idea of how “normal Tuscans” live, this is definitely off the tourist trail.

Top Tuscany Tip: Every 10 years or so the lake gets drained for cleaning. If you’re lucky enough to be in the area when it’s happening it’s a MUST SEE, as the drowned village is revealed! The main issue is finding out when it is scheduled for – it was due in 2014 when I was there, but sadly nothing was published, so keep your eyes peeled.

Lucca is, hands down, my favourite place in Tuscany. It’s a perfectly contained medieval walled city, inside of which are lovely, characterful piazzas, lovely quiet streets, gorgeous old Duomos and churches and it’s not overly touristy. It’s actually a town I could happily live in.

Lucca is the type of town you can spend days in, just wandering, enjoying the architecture and the ambience. Even the Main Street isn’t too crazy, there are hardly any tourist shops, but plenty of gelato shops, there are towers to climb, and piazzas to sit in and drink prosecco. It’s all just so laid back.

Even cycling around the walls is chilled – you can hire bike to slowly cycle the 4km around on top of the tree-lined walls. Or you can just cycle some of it. Or you can walk it. Up to you.  You can stop by the Piazza dell’Anfiteatro (an old roman ampitheatre, and hence oval shaped) just to sit and drink prosecco. You can go and visit the wonky duomo, which was built a bit wrong, and has a bit of a skewed front because someone messed up. You can pop in and look at the art, you can find an opera recital of Verdi’s famous arias (he lived in Lucca). It’s just chilled. I love Lucca.

Top Tuscany tip: climb the Torre Guinigi a little before sunset. With all towers, it’s a hefty climb but this Luccan tower, dating from the 1300s is the only tower with trees at the top. Get there a bit early for a good spot and settle down for a lovely sunset show.

Sunset from the Torre Guigini 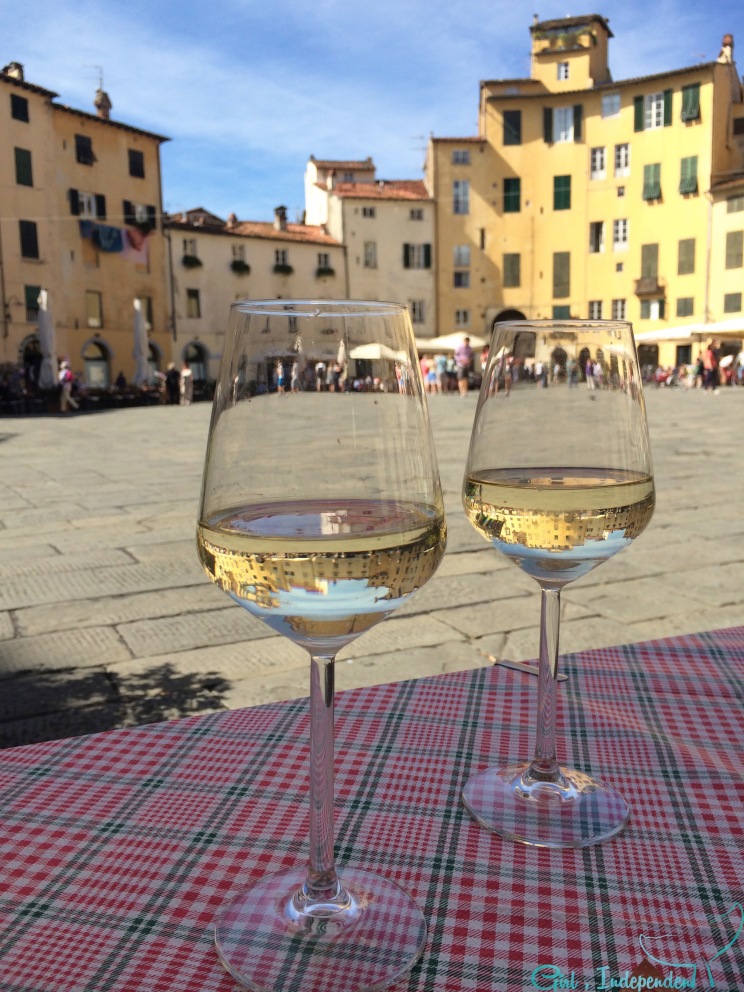 Prosecco in the Piazza dell Anfiteatro

My final Tuscan village will always be close to my heart. I got married in Bagni di Lucca, a delightful collection of small villages around a central point, Ponte Serraglio and the River Lima. In La Villa, Risorante La Lira DOES THE BEST Pear and Gorgonzola pizza ever.  Bar Italia is a lovely place to sit with a beer and listen to the river. There is a stunning walk down by the river itself with lovely scenery – there is an entrance to it near the Circolo di Forestieri.

Further down the road, a short drive to Borgo a Mozzano you’ll find Ponte del Diavolo – the Devils Bridge. Dating from the 11th century, the legend goes that when the bridge was built, the Devil appeared and told the villagers he would build the bridge, but would take the first living soul that crossed the bridge as payment. The villagers tricked him by sending a dog over first. I’m not sure what that says about animal rights in Borgo a Mozzano but it’s still a lovely place to visit and take photos.

Top Tuscany tip: stay in Pian di Fiume –  A rustic agriturismo with barrels of charm, and an eccentric host Daniela whose cooking is the best in the region, hands down.

Pistoia is halfway between Florence and Lucca just off the main road, and doesn’t feature much in many guide books that we had. We decided to drop in on the way between the two, and managed to arrive on Market Day – and sadly not quaint farmers market day either. The main Piazza looks like it would be absolutely stunning without a collection of quickly thrown up metal stalls selling One Direction t shirts and mobile phone cases. We’re definitely going back, to take a look at this stunning little town, but just probably not on a Saturday…

Top Tuscany tip: I recommend a guide book (Lonely Planet are my faves) to read up more about each town’s history, some of it really is fascinating, if you like that era of history.