Although I often post on here about some far flung countries and some fairly out-there experiences, such as swimming with whales, diving with sharks or travelling solo, sometimes the best travel experiences can be found right at home.

Over Christmas, I went back to my childhood town in the North East of England to visit my parents. I’m from Sunderland, a traditionally industrial, working class area, and my mam (to use the local dialect) lives in a small town called Seaham, about 8 miles further south, on the coast.

Up until around 25 years ago Seaham was one of the biggest coal producing towns in the area, and its history is one of growth through the Industrial revolution to heavy mining in the mid to late 1900s. Towards the end of the century the mining industry was closed down (amongst vociferous political anger and upheaval) leaving the whole region quite run down and empty. 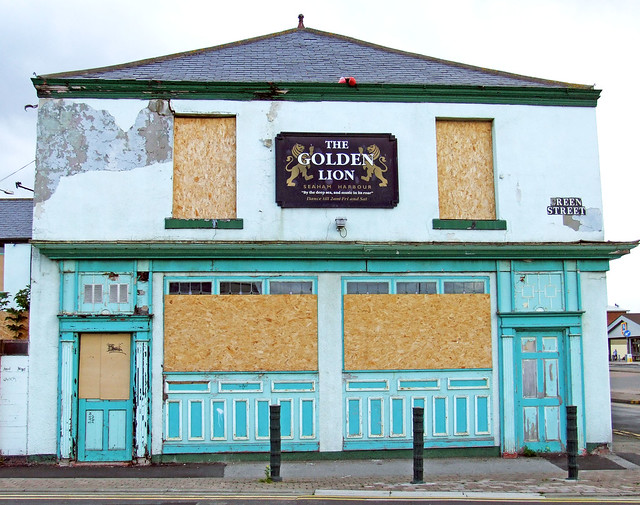 The Golden Lion Roars no More, by Art Crimes, is licensed under CC BY NC ND 2.0

Over the last few years a bit of investment has seen Seaham grow from a dead end to a charming little seaside town, with some independent niche coffee shops, cafes and a beautiful promenade walk along the cliffs looking out into the North Sea.

While I was home, Mam mentioned to me that the local Seaham Heritage Association had recently publish a pamphlet with two “Heritage Walks” mapped out in them – along with some tidbits of information about the sights and old buildings that the walker passes along the way: As the weather was unseasonably mild for Christmas, we decided to go adventuring!

Our first stop was down by the harbour, where a new marina has been built, and comprises some lovely little independent shops and a cafe.  The original harbour was built in 1830s to help transport coal from nearby mines to ships who would then ship it globally. The remnants of the old railway heritage can been seen around town with train lines still visible in the roads leading down to the marina.

Near the marina, a recent addition to the harbour is a fantastic statue, originally commissioned as a temporary piece for the WW1 memorial, the locals have raised enough funds to keep it there permanently – it’s called Tommy, and is incredibly poignant.

Also around the harbour are memorials of Seaham’s long standing mining heritage.  The pit wheel from one of the old pits (there were four in Seaham in total, and many more throughout County Durham), stands as a reminder of what used to be.

From the harbour, there is an amazing view up the coast and along the beach – a great bracing walk on a winter’s day.

As we followed the map, we learned about Seaham’s history – as a small harbour town built predominantly to help ship the Marquess of Londonderry’s wife’s coal to sea. What the pamphlet teaches me is that the local area must have been thriving with industry on the back of this, and we pass the sites of the old Infirmary, Literary Institute, Drill Hall, old farms, and an Engine works, built in 1855 to build steam engines.  Mam proudly tells me that my grandad used to work there.  I never knew that!

We follow the walk into the local park, and down to Dalden Tower, somewhere a remember playing when I was a child.  We read that it’s a 12th century tower, probably abandoned in the 1600s.

And this at the end of a road!  It’s something I always thought was fairly cool to have at the end of my street when I was growing up, but the brochure really brings it alive.

We circle around and walk back down to the harbour, along the old Railway lines – now a nice green walkway – and learned that the original railway cost £20,000 to build in 1831 and that locals used to ride the trains illegally before local transport was freely available – many of them died.

We reach the marina again, an hour after we left, and  just as the sun begins to set, and the cold draws in. We pop into one of the new local cafes on the sea front – one that hasn’t been here long, but is warm and niche, and very busy – highlighting how successful the regeneration of the town has been in the last 10 years or so.

I’ve learned a great deal about my home town, and about it’s great industrial heritage, and how it supported the prosperity and growth of the whole region throughout 200 years of British history.  And I feel very patriotic.  Not only that my home town can be so prosperous on such a global level without even realising it, but also that this little town, once so mighty, but then dashed into obscurity and decline in the 80s by political ideals, has raised itself out of that, and begun the road to prosperity, albeit on a small scale, once again.

The Heritage Walks brochure can be found here on the Seaham Town Council website.

4 thoughts on “Travelling back to my roots”