I’ve heard people say Dahab is what Sharm El Sheik was like 15 or 20 years ago. Having only been to Sharm in recent years, since it’s been westernised and filled with McDonalds, nightclubs and 5 star resorts that you don’t need to leave, I’m not sure if that’s true. However if it is, it’s a shame for Sharm.

Dahab may have changed in the four years since I visited, I’m not sure. I’d like to go back, but I’m worried about the impact of western tourists on what is a sleepy, friendly Bedouin town on the Red Sea. 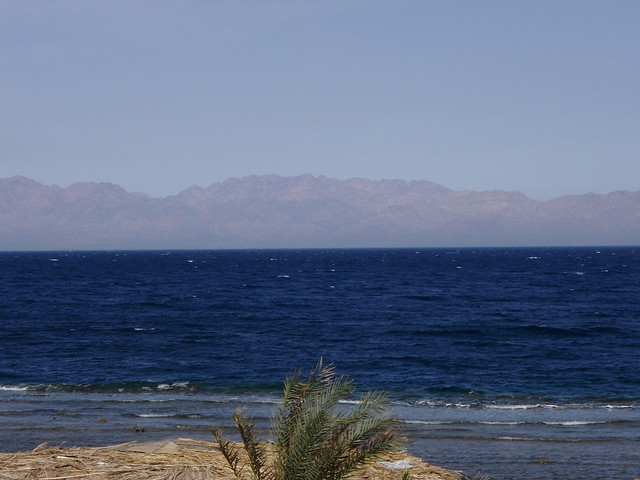 I spent a week in Dahab in 2007: my first scary single holiday. The aim of that first solo adventure was to see the pyramids, but I thought I might struggle in Cairo for a full week on my own (in hindsight, I would have been fine, if a little overwhelmed). Having passed my first diving qualification the year before, I thought I’d combine some diving with that first bucket list goal. And the Red Sea’s great for that, I found.

Dahab’s about an hour north of Sharm, in a rickety taxi driven by a bloke with no teeth who speaks no English. You can get your own taxi at the airport for £50, but given this one was actually organised by the travel company (I went with Longwood, who were very good), I’m not sure I’d fancy your chances of picking a random one on arrival. Although the best thing about getting the taxi, is watching the neon of Sharm leave you and you head into a black abyss of road and black mountain. (You can tell I’m not a commercial holiday maker, at this point, I presume.)

So: Dahab. Quiet, laid back, dusty. Hot, in April; 36 degrees celsius or so, but the water was only about 24, so it’s nice getting into the sea. Which of course is precisely what you’d go there to do, as other than a small sea front shopping promenade, and some (very nice, low key) Bedouin-style cafes, there’s little else to do. Which, if you like that, is perfect.

I, however, had gone for the diving.

As Dahab is so remote from its big dive sister up the road, the dive sites were never busy. In fact, I’m not even sure I saw anyone else diving, other than me, my buddy (a bloke from another hotel) and Matt, my instructor. A blonde Johnny Depp. A bit short for me, but very easy on the eyes, as dive instructors generally are, I’ve found. And a really nice guy. A Chelsea fan, but they can’t all be perfect.

The Lighthouse, and the Wall are common dive spots, The Canyon (for deepish diving), the Bells (a chimney dive, named after the sound your tank makes as you rattle off the sides – not for the claustrophobic diver), and of course the Blue Hole.

Now before you dive the Blue Hole, never, ever look it up on You Tube. Just don’t ok. You’re not going deep enough to worry about that, so save yourself the worry. It’ll be fine. Honest. I’m still here, aren’t I?

The Lighthouse, one of the most popular dives, was the spot for my first ever night dive. Now having done a ton since then, I’m not phased by them now. But I can remember this specific dive – my thirteenth dive, ironically enough. I was utterly blown away by the whole thing – the blackness, the quietness…I remember thinking it would be the closest I’d ever feel to being in space. I could see the torches of the rest of my party behind rocks, thinking I was on the set of Alien. But without the scary monsters. I really didn’t want it to end…. and I feel slightly sad that night dives don’t give me that same rush anymore.

Now, unlike Sharm, all of the dives here are shore dives, (which of course means you don’t have to get up at daft hours to get on a boat to go to a dive site with 50 other boats moored up), but you can also do some (quiet) boat dives – Shoab Saeed and Gabr el Bint are nice reefs with cracking life. I do giggle when looking back on my dive log now, when I wrote “I saw FIVE lion fish!!!”. If only I knew how many bloody lion fish I’d see over the next 3 years, I don’t think I’d be so excited. Remember people….this was my fifteenth dive. You get excited by lion fish.

As I’d booked a day in Cairo (flight at stupid-o’clock, full day there, flight back) there was one day I couldn’t dive (non-divers note, diving is prohibited 24hours before you fly due to pressure changes and and an increased risk of the bends).

Now Dahab, as I’ve mentioned, isn’t lively like Sharm (or at least wasn’t in 2007). But, on this non-diving day, I had a camera, and thought it would be a good idea towealk from the hotel (Bedouin Moon – slightly north of the town, out of the centre) back into town in the mid-day heat. Note to travellers: Probably not a good idea. I survived, but I was slightly pink. But just wandering round the quiet streets, snapping everyday life, graffiti (arabic graffiti??), kids, goats, camels (of course, there’s always camels), and wandering around the tat shops (again, there’s always tat shops), chatting to the locals, it was very pleasant, low key and relaxing. Being a white (nay, blue)skinned westerner, you still get the shop owners pestering you to come in and “look” but politeness goes a long way, as does a firm “no”.

There are a few low-key bars to sample, one of which I was invited to by the hotel staff, which had cracking cocktails and a fire dancer – you don’t get that in London often.

But the whole town is just laid back. There’s no Sharm-like commercial hustle. There’s also no Sharm-like nightlife, but I saw that as a good thing (unless you’re looking for a heavy night) but if you like a drink and a shisha on floor cushions, chatting and laughing the night away – it’s perfect. And for a sunburned, single, female, european who sticks out like a custard cream in a tin of kitkats , it feels amazingly safe. Even when every car goes past you asking if you want a ride (everyone’s a taxi driver in Dahab!) you still feel very safe. Hotel staff are genuinely friendly (unlike Sharm). For my first solo holiday – it was very reassuring.

If you google Dahab diving, chances are the Bedouin Moon will appear, along with its attached dive centre Reef 2000. Dive Operators like Scubatravel and others use the Bedouin Moon. Presumably because it’s cheap. And it is, but its perfectly reasonable. It’s quiet, slightly out of town, clean, and liveable. Not luxury – if you’re looking for that try the Hilton. But the staff are lovely, the food is nice, and you can ever get a massage if you ask nicely. And pay, of course.

Oh and they do Yoga Diving. Yeah, I don’t know what that is either.

Reef 2000 are a cracking little dive centre, european owned, lovely people, technical teachers too, If you want to do that weird, deep stuff, or try rebreathers (definitely don’t youtube the Blue Hole).

So what else can I do?

Well, there’s the day trip to Cairo. Which was that life-affirming thing for me. But also quad-biking if you want. Or a trip to some monastery. But it’s hot, you might want to think about spending all day in the desert.

Or, do what I did, and get a group of people you’ve just met in the hotel, and persuade hotel staff to speak to their mates and get them to take us up into the mountains on camels and have a campfire, with shisha, beer, Bedouin food, and then sleep under the stars on a blanket.

Yep. I hope it hasn’t changed too much. I’m sure, with a pang of regret, that Dahab will have progressed its downward spiral towards Vegas-style westernisation complete with Egyptian TGIFs and Pizza Huts. Which would be a shame. Because it’s a lovely, low key, non-luxury, friendly, relaxing little town. With great diving. And lovely stars.

One thought on “Dahab: Like Sharm, but no McDonalds…”